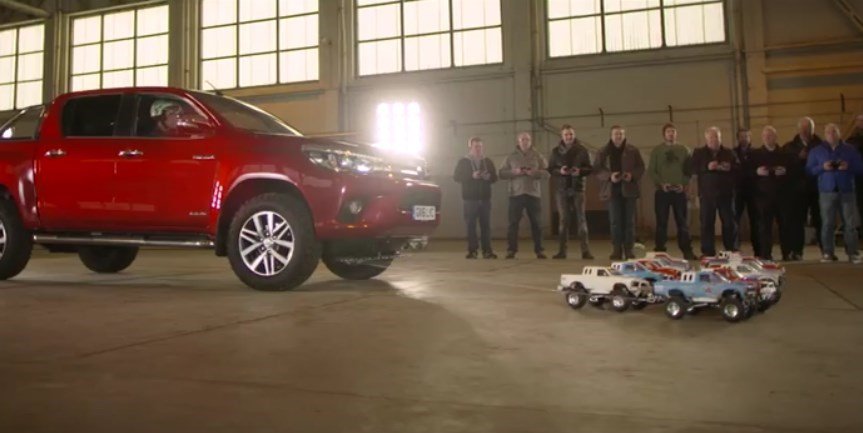 I love these kind of stories, just for the sheer fun and inventiveness of thought, and then executing the idea!

Toyota decided to recreate a famous 1980s stunt in which a fleet of radio-controlled Bruiser Tamiya radio controlled cars successfully hauled a Hilux at Tamiya’s headquarters in Japan. Today’s Hilux has become a much bigger and heavier vehicle, so could the job be done again?

Before shooting began, precise calculations were made that showed that the task could be accomplished. A Toyota Hilux Invincible Double Cab model tips the scales at 3.21tonnes; each radio-controlled Tamiya Bruiser 1:10 scale kit can generate 2kg of pulling force, so between them 15 cars have 30kg of muscle, when exerting maximum power on a flat surface – theoretically enough to set the Toyota rolling.

To ensure the Bruisers performed to their peak ability, their tyres were inflated to their maximum pressure (60psi) and their four-wheel drive electric powertrains were locked into low ratio transmission. To help them gain traction, two 500g diving weights were placed behind the cab section of each vehicle.

A team of radio-control model experts were brought in to do the “driving” and ensure that all machiens set off at the same speed, and applied their pulling effect consistently. The remote controlled cars with divided into two sets, and attached to the Hilux’s standard front tow points.

Check out the full video here!

These films put a new, fun perspective on the toughness and reliability that have made the Toyota Hilux a motoring legend and Tamiya’s Bruiser one of the world’s best-loved radio-controlled cars. They show how skilful engineering and lasting, robust build quality are key to making ever-better cars, whether you are manufacturing a full-size pick-up or a model that’s just one tenth the size.

What CES 2017 Taught Us About The Future Of Cars