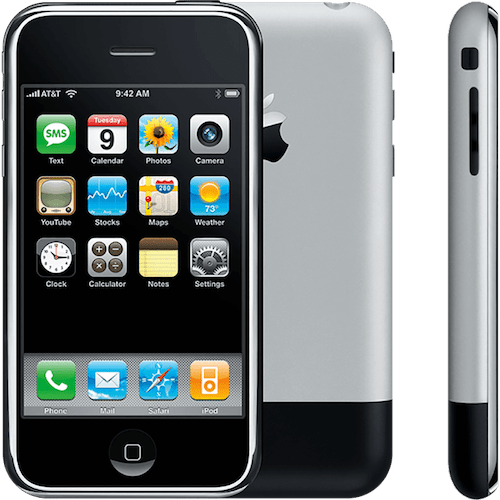 June 29th 2007 was the day the iPhone was launched, after being unveiled on January 9th by Steve Jobs at the Macworld convention. On the iPhone anniversary we take a look back at the original device and how it has changed since over the decade.

Apple looked to revolutionise the smartphone market with a mobile device that gave a desktop experience for email and web browsing. While it was a far cry from where it is today, it was at the time revolutionary in the experience it gave, and forced all other manufacturers to radically change their form factors to keep pace.

A huge secret at the time, but the original unveiling and demo was a huge risk, as the iPhone and iOS were far from ready, “often randomly dropping calls, losing its Internet connection, freezing, or simply shutting down.” Luckily the demo went off without a hitch, with Steve Jobs casually following an extremely rigid set of steps in showcasing the various features! The first Google Android device, the HTC Dream (or G1) had a hardware QWERTY keyboard and was a chunky device which crashed frequently. Microsoft was caught between PDA devices with stylus inputs and candy bar phones with T9 inputs for its devices. Both spent the following years playing catchup and modifying their mobile OS (iOS) to work with finger inputs that was so effective on the iPhone.

The launch feature set for the iPhone was actually incredibly limited in comparison to present day. No Siri, no Apps, no copy & paste and no 3G! Once purchased it had to be taken home and activated via iTunes, unless you bought it in an AT&T store. And AT&T was the only network it was available on!

But while it had some issues, it got a lot right. It was an extremely proficient device, for the first time successfully combining a phone, music and video device, web browser and email client in a single device with minimal compromise or trade offs.

One of the first devices to use a capacitive screen instead of a resistive one, the user interface was a dream to use, and silky smooth in every respect.

At the time of release, Apple’s slogan for the product was ‘This is only the beginning’. These words have turned out prophetic as whole industries now rely on the iOS platform to provide products, services and information…

But Apple did what it always does well. It evolved and improved the iPhone, both in hardware and software continuously, year on year. All the issues were addressed, and pretty soon it was a viable phone, entertainment device, web browser, email client, and all round business tool. It took longer to get into the corporate market, but as solid encryption and enterprise device management features were introduced, businesses soon became interested.

The landscape of the smartphone market has changed dramatically since that introduction back in 2007. There are now 14.6 million iPhone users in the UK alone, representing 34.2% of smartphone users. Device form factor has shifted from a predominantly keyboard input to a predominantly touchscreen input.

Two aspects of the iPhone have dramatically changed the way people live. For millions of people worldwide, the iPhone is about the internet and the camera.  Having access to the internet within arm’s reach at all times has changed the way people consume media, buy products and communicate. The camera alone has made communication far more visual, as people share millions of pictures and videos via SMS, social networks and messaging apps. The camera has also empowered every iPhone owner to become a content creator.

Key iPhone improvements over the years have included

Hardware wise, the changes have been less frequent, with each ‘S’ model following the form factor of the previous version, leading to main hardware redesign every 2 years.

The iPhone 3 and 3G introduced an all plastic design with more rounded back making it easier to hold.

The iPhone 4 and 4S introduced the all glass back and steel edges, still one of the most popular designs, but also suffered from the first major leak when a test sample was left in a pub and sold onto Gizmodo.

The iPhone 5 and 5S had a similar design to the 4, but were made even thinner, and the screen increased to 4″ by making the unit slightly taller. The 5S also introduced TouchID – the first home button change.

And then the iPhone 6, 6S and 7 – all following the new design of an all metal case, completely flat form factor still, and with rounded edges. For the first time ever, 2 handset sizes were released – all variants have a larger sibling, the “Plus”. All of these models are larger than the previous generation to satisfy the demand for bigger displays. The 6 / 6S and 7 all have a 4.7″ display, while the 6 Plus / 6S Plus and 7 Plus all have a 5.5″ display.

Apple will continue to refine the iPhone with a dramatic form factor change, celebrating the 10 year anniversary in style after the last 3 iPhones have all followed a near identical design. Skipping the ‘S’ update for the first time, Apple will likely jump straight from the iPhone 7 to the iPhone 8.

Rumoured features for the iPhone 8 are an almost edgeless display, removal of the home button with the TouchID sensor hidden behind the screen, integrated wireless charging and the annual improvements to the processor, memory and camera.